%The ceramic pieces of Annie Campbell in her MFA thesis show at the SoFA Gallery, while taking the form of tree trunks, branches and stumps, pull against the steel hooks and cables meant to wrench them loose. Indeed, perched atop the flexed and straining roots that act like legs or tentacles, these mutilated trunks have taken the occasion of their harvest to awaken to outright rebellion against their fate. Insofar as they also reflect the feelings and opinions of their maker, they nearly shriek in protest of their cutting, even as they are dragged to market in helpless harness. The polemical aspect of the work is impossible to miss. As well as a woody color and texture to the bark on limbs, the wood puckers and pulls like muscle and skin when hooked (“Escape”), or pinches and constricts painfully when lashed and bound by steel cables (“Bound”). Thus the work opens onto an interesting subjective dimension, where the cuts and pulls register as wounds and indignities. The animation of the work risks a kind of cartoon humor. The roots of the stump in “Escape” brace themselves against the gallery wall to resist the lash, like a deep-sea creature pulling against a fishing line. The tension of pull and resistance gives a satisfying dynamic equilibrium to the installation. In fact, the balance of power implied by this stand-off may shift the terms of the polemic more than Campbell realizes. As a vehicle for ecological protest, the trees must be rather passive victims of a ruthless exploitation, a role that Campbell has clearly rejected in her works. No one who has ever attempted to pry a stump from the ground, especially with a lone pair of hands and shovel, would consider it easily yielding. What Campbell depicts, with the multiple strands of binding cable lashed to ceiling and wall, bears some resemblance to King Kong in his brief captivity, especially in the central piece, “Bound.” The multiple parts lashed together are distinguished in their markings; one part bears intricate designs burned into the wood like a tribal tattoo. The strength on display here has implications for the autobiographical dimension. As for the ecological dimension, nature always has its revenge. The branch that bursts apart the wall-mounted metal box in “Clutch” shows the power of nature in its aspect of growth and blind forward thrust. This is the taproot that buckles sidewalks, that invades every join in plumbing, that conquers every foundation, and, in a jungle setting, pulls down every monument. The drama of pain, exploitation and conquest that Campbell begins with, ends with a cautionary warning for those with the reckless saws.% -Tom Rhea, Professor of Art History, Indiana University, Bloomington 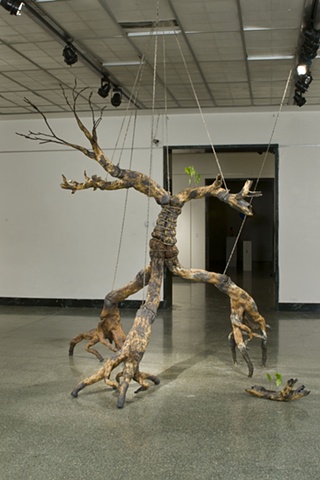