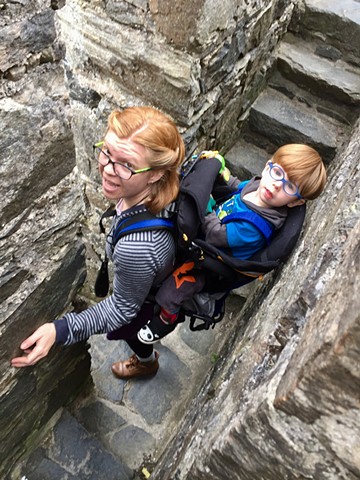 The catalyst for my current work was a traumatic personal event that unfolded in 2017. My infant son was diagnosed with a rare and dangerous neurological disorder that caused severe epilepsy. This condition required extreme brain surgery involving a complete disconnection of the hemispheres. My current work is informed by extensive research into brain (mal)functions, structures, and neuroplasticity in which I immersed myself while trying to understand what was happening to my baby. I became fascinated by neuronal cellular forms and what began as catharsis evolved into a new visual vocabulary within my long-time conceptual focus on environmental degradation. My previous work explored tree forms so the transition to neurons, with their branching dendrites, is not a far leap. With-in two years of the surgery, I felt a strong desire to pull away from personal trauma as a conceptual core and re-focus on the environmental crisis. Speaking to the urgency of the climate change crisis is the motivating force behind my artistic drive. A significant aesthetic influence in my current work is the drawings of the pioneering early 20th-century Spanish neuroscientist Ramon Santiago y Cajal. His renderings of brain structures are so comprehensive that the 100+-year-old drawings are still used in medical schools today. They represent a beautiful union of art and science that I strive to incorporate in my sculpture. My materials are varied, ranging from translucent porcelain, black stoneware, air-dry clay, slip-dipped and fired natural specimens, wire and LED lights. The illuminated elements are created by dipping botanical forms (i.e. paper wasps’ nests, thistle pods and leaves) into translucent porcelain slip. When they are fired in the kiln, the organic material burns away, leaving a shell into which I insert the LEDs. I am currently learning how to solder and researching how to program Arduinos to create custom light patterns based on my son’s former seizure activity. My sculptures are designed to be wall-mounted, ceiling-suspended, set on pedestals and displayed on the floor. Our bodies mirror nature in undeniable ways. Yet, our society has created an artificial construct that enables us to see ourselves as separate from nature. This allows us to enact our “right” to control and conquer whatever resources we “need” or desire. Botanical and human vascular and respiratory systems, like neurons and their synapses, move impulses and sustenance through our bodies. The “information super-highway” that exists amongst tree roots in the form of mycelium fungal networks informs this work as well. The wasps’ nests have a paradoxical representation as both an incubator of potential but also a harbinger of danger. These forms serve as a metaphor for, and symbol, of society’s dysfunctional relationship with nature. The neuronal forms in my work are malformed, diseased and deteriorating, their connections weakened by abnormal impulses; a dissonance caused by a detachment from their origins. This work explores the danger of ambivalence in the face of environmental crisis.